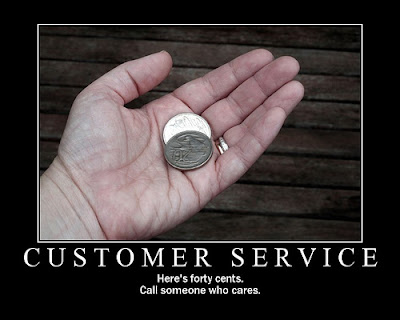 It was a morning like any other morning: I was up way too early. A few bills were sitting on my desk and I figured I’d pay them.  One of them was from my cable / internet provider, a company that’s name begins with a C and ends with a t.

India answered. I think India handles the overnight shift. After a short hold, a courteous man began to read my bill to me as explanation.

“I can see the breakdown myself,” I told him. “I need to know why it’s gone up.”

“Oh, I can not help you with that, let me connect you with Retention.”

From the start, I could tell Retention was in America, but also that she was definitely not in a good mood. Maybe she’d been up all night or maybe she just was a bitch.

I told her that I was concerned that my bill had gone up significantly and I mentioned that friends were getting more services for less money from Direct TV.

“”I can reduce your service,” she said. “That will lower your bill.” “Well,” she sniped, “I can’t do anything for you if you don’t want to do anything about your bill.”

Of course, that was a lie. She was just in a bad mood. Now, I know what you’re thinking. You’re thinking that I can be a bitch and you’re right, I can. But it was way too early to get my bitch on.

“May I speak to a supervisor?” I politely asked.

“May I please ask why?” she responded.

“Because I don’t think we are communicating.”

I agreed to hold.  Four minutes later, she was back. She’d had a complete personality change AND had a great offer for me: $89 a month base rate. Wow! I was thrilled!

“You’ll get an automated call that you must agree to, and then it’s done,” she said.  I thanked her, and we said goodbye.

I told hubby and he was suitably impressed at the gigantic savings.  At that moment I knew why I was teaching college-level negotiation. I was a negotiating goddess!

The phone rang and I responded to the automated confirmation. It rang again with the automated customer service survey. (Info you can use: I’ve learned that Comcast hold time is significantly shortened if you agree to the survey at the front end.)

I felt good. Just as I was hanging up, hubby comes running in.

“They cut off the cable box to our family room TV.”

Sure as shit, they had. And I was sure as shit that Miss Comcast Rep had done so in retaliation for my asking for a supervisor.

What a disaster–hubby couldn’t get the NFL channel in the family room. This had to be fixed, and quickly. Thursday night football was at stake.

I dialed Comcast back.

“Yes, they have reduced your service, as you asked.”

“No, I didn’t ask, the rep knew I wanted to keep my services.”

“Well, there’s an error message on your account. I can’t clear it, I have to send you to Internet Dept.” 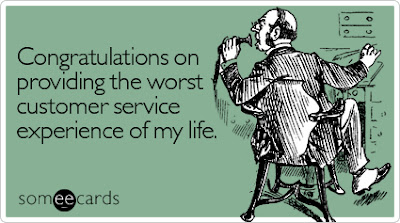 “OMG, what have you done to my internet service?”

“Please hold while I connect you.”

After 20 minutes of trying, Internet couldn’t help clear the error or cancel the cut services. They sent us to Tech Support. Nope. Then they “escalated” to Sales.

“I can not change your account, there is no provision recourse,” a female rep told me.

“What does that mean?” I asked.

“There is no provision recourse.” (or some such not understandable term)

“But what does it mean?”

“I don’t know what it means,” she responded. Yes, she really said that. She put me on hold so long that we got a recording in Spanish that was so faint we could barely hear it. It just kept going until we finally hung up and called back.

Again, I explained myself to the new rep. I decided to try some crocodile tears.

Meanwhile, I was madly tweeting @Comcastcares (ha!) and Comcast Will, Comcast Steve and all the other Twitter accounts related to Comcast customer service.

“I will get you to a supervisor,” was the response.

My imitation of an insane woman finally got me a grown man who was not only articulate but seemed to be in charge.

“Tell me what happened,” he asked, in a soothing voice.  I started my tale, calmly, and by the time I had the second sentence out, our family room cable box began to repopulate. Yes, he had fixed it. 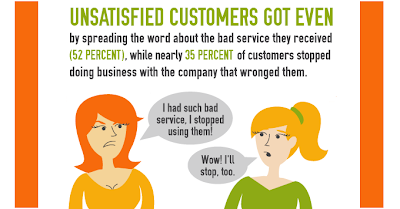 In fact, Miss Bitchy Comcast Rep had reduced our service. But he had restored it. Finally, someone who knew what he was doing. He apologized profusely, and offered to give us a little discount.

Ok then.  I took a deep breath and got in the shower. Then left for work, my nerves frayed.

At school, my cell phone rang.

“This is Cecilia in the Executive Escalation Department for California and I am returning your call about the complaint you’ve made that rates are too high.”

What? Rates certainly ARE too high, but  I’d made no such complaint. But Twitter’s @ComcastWill, or whatever his name was, without evening knowing my story, had made one on my behalf. Nice move, Tweeter! He knew what would happen. I’d get to the right department. Executive Escalation. Boy, that does sound important, doesn’t it?

Ah, Cecilia. She is a Comcast Rock Star.  I told Cecilia my entire story, including my belief that Miss Bitchy Comcast Rep had done it on purpose.

Miss Cecilia has a great job. She comes in after a customer has had a complete nervous breakdown and offers comfort and financial candy. She made me very, very happy.  She gave me a great rate for two years, plus a credit and some free premium channels. The confirmation email read like this:

It only took me three hours and a nervous breakdown. But I did put Cecilia on speed dial. And I’ll be making that call to Corporate office.  Has this been a good experience? That’s not a very complicated question at all.

Cecilia, you do rock but Comcast? You don’t give a shit until you’ve reduced your customer to a quivering mass of hysteria.

Need Cecilia to handle a California Comcast issue? Leave me your email and I’ll share her info.

Oh, and hubby’s begun a conversation with Direct TV. Just in case.