The origin of coffee ..and (wo)man 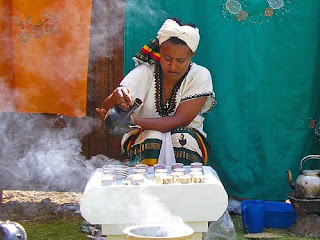 I was enjoying a cup of hot, strong coffee this morning & wondered about its origin.

Turns out that recent botanical evidence suggests that the history of the coffee bean began on the plateaus of central Ethiopia and somehow was brought to Yemen where it was cultivated since the 6th century. Upon introduction of the first coffee houses in Cairo and Mecca, coffee became a passion rather than just a stimulant.

The original “mother of the human race?”

Looks like Ethiopia may be the origin of everything good.

And no, that is not Mitochondrial Eve, pictured.

in case you were wondering.