The peace of Buddhism 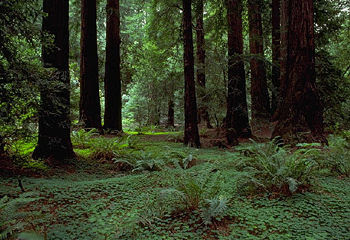 Sheltered by a forest of huge, old redwoods, the Land of Medicine Buddha held me in its calm embrace. I arrived at dusk by way of a narrow winding road with barely enough space for a single car. Even though the sun was almost ready to set, I couldn’t see it for the canopy of green. A lovely place for a self-retreat.

The silence felt sacred. A few signs encouraged visitors to keep their voices down and except for one shrill little bark that sounded suspiciously like Riley (but wasn’t), there was not a sound.

A large, colorful prayer wheel covered with mantras sat in the small main plaza. The temptation to spin it got the best of me, and I sent out my intentions to bless all sentient beings. Despite the chilly air and looming darkness, a Buddhist nun was working on an even bigger one nearby.

Accommodations were on the spartan side of comfortable, adequate for a writing retreat. Yurt #12, where I stayed, was not really a yurt at all. It was a tiny room, one of maybe eight in a wooden building warmed by individual space heaters. There were two twin beds (one on which I put my stuff) and a small writing desk and chair that I requested in advance. During the day, a skylight brought in sunshine but at night, I wrote by a couple of dim reading lamps, using the single overhead eyeball fixture when needed. No phone. No cell coverage. No internet. No TV. 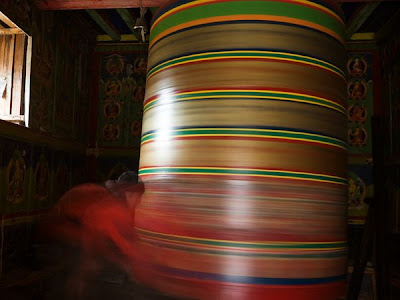 My friend and I went to a meditation the first night. As we waited outside in the cold night air, we each spun the prayer wheel, sending our blessings and intentions out to the world.

The meditation room was spectacular, awash in coral, green, blue and gold. So much gold! Beautiful little lamps shaped like lotuses lined several walls and above them, eight gilt Medicine Buddhas kept watch, emanating vibrations for health and healing. Water bowl offerings and artificial flowers in all colors of the rainbow added to the exotic ambience.

We are not so different after all, went the second meditation of the hour. Our meditation leader encouraged us to think of how friends/enemies/strangers can shift roles even in the same day, and to acknowledge those who have helped us along our paths. The Buddhist concept is equanimity.

Afterwards, we unpacked our picnic dinners and ate in my room, sharing vegetables, cashews and whatever else we had with us. We talked a little about writing and about our meditation.

I learned to meditate many years ago; my teacher was a former Buddhist monk who lives and works just a few miles away in Santa Cruz. I still use his meditations on CD, when I think to sit. In Tampa, friends and I occasionally went to a drop-in meditation. We loved it. But then I moved and my life grew to include a full-time husband and pets. Meditation fell by the wayside, like so many things do after a big life transition. I’d like to get back to regular practice.

Outside, the air was penetratingly cold and the black night sky was awash with stars, glittering, tempting us to think about what lay beyond. On the mountain, the stars don’t have to compete with the artificial lights of the nighttime city skyline. We don’t have to compete, either; we all glitter in our own way.

Inside, the space heater made my room cozy and I slept well that first night.

After a breakfast of cereal and fruit in the dining room, we returned to our rooms and wrote. But after a few hours of work, a hike up the hill beckoned, and we headed toward the 8 Verses Trail. It was a fairly steep climb.

Shrines and statues appeared every so often, giving us a reason to pause and catch our breath. Hikers had left many kinds of offerings: coins, a miniature skateboard, a small gold turtle, a candy cane, a rabies tag. Each trinket had a story, I knew, but my head was full of my own writing and I didn’t want distract myself by thinking about what they might be.

At first, I was sorry that I hadn’t thought to bring a camera, but then quickly realized that taking photos would have ruined the moment. It was enough to preserve what I saw in my memory and recall it whenever I want. 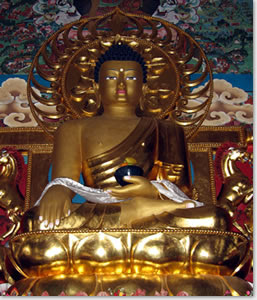 At the Wish Fulfillment Temple, a gigantic Buddha served as backdrop for another, smaller Buddha. No matter how we worship, the importance and comfort of rituals are obvious. My friend, also born Catholic, and I talked about fundamentalists, and how hard it is to believe that any deity would send the majority of the world’s population to hell because they weren’t a member of a single club.

No, I don’t think it matters how we worship, only that we do acknowledge that a supreme entity has made us all. Maybe, as my husband thinks, it’s a watchmaker God who winds it up and lets it run without intervening. Or maybe it’s someone else. But I am as convinced as ever that it’s an inclusive Deity and not an exclusive one.

Lunch was a simple but tasty meal: hearty and delicious root vegetable dish and tender greens with mushrooms and onions. Then, back to writing.

At home there are a million distractions to tempt me: Riley wants to go outside, the phone rings, Little He howls for attention, I see the DVR taping and check to see what it is, books sit waiting, M. wants to talk, there’s a meal to prepare. But it’s far easier to focus when I’m sitting in the stillness of a redwood forest. And then, too soon, it’s over. 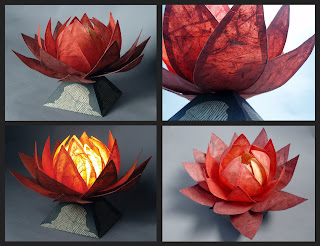 So what did I take away from my short retreat? Some 6,000 words and some support work for my book, but beyond that I brought back the realization that I needed to create a more peaceful writing space. That a place needed to found for everything in my office and that most of it should be out of sight. This kind of work takes a clear mind and a clear mind requires a clear space.

I am not known for being a clear space kind of girl.

I’m not sure when I’ll return to this magical place, or even if I will. But I know that I’ll carry the Medicine Buddha with me from now on.