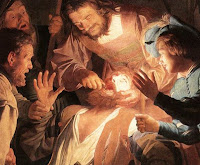 My long-time dentist in Florida was half of a pair of brothers who practiced on the shabby west-side of town. Their offices weren’t that nice, but they and their staff were. It was a very hometown practice, a little like what it might be like in Mayberry, RFD.

I liked my half of the pair, Dr. Sam. He reminded me a little of my father, whose patients also called him Dr. Sam. Now he’s close to 70 (if not there already) and he and his brother only work part time; they have sold the practice to a younger dentist.

It was never a particularly high-tech office, but given how we hate dental appointments, there was a lot to be said for a pleasant, friendly staff and an older office full of magazines; one that didn’t feel intimidating.

Before I moved, Dr. Sam told me I had decay under a crown and needed to get it taken care of right after I moved. Which meant crown removal and replacement.

Of course, who likes going to the dentist? It’s taken me half a year, but I have a new dentist. Let’s call him Dr. Fang. 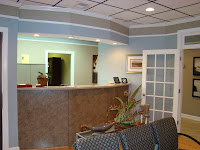 Dr. Fang is in his 50s, a nice-looking and pleasant Chinese guy who went to Cal. His offices are immaculate, and well-appointed. Well, maybe a little sterile-looking. That’s a good thing, right? Just not for a lobby. But very modern.

Not a magazine in sight. Just a “smile” photo album, a few children’s books and some promo material for Invisalign braces.

BUT, Dr. Fang actually has a Facebook page. On it, he runs a contest, “Where in the world is Dr. Fang’s t-shirt?” Patients wear his t-shirt in exotic places and enter a contest with prizes and everything. I suspect his staff has run a bit amok on this one.

His new-patient procedure is very elaborate. After filling out a patient history, I was shown into a small, modern conference room. The dental assistant, who had been with him 20 years, sat and talked with me about my teeth.

You know the start of Nip/Tuck, when the plastic surgeons ask new patients, “What is it you don’t like about yourself”?

Truthfully, I’d never set goals for my teeth. I had a mission, vision and values for them, but no goals. I didn’t really say that, but I wanted to. This was a whole new world.

After about 20 minutes of discussion, the longest I’d ever talked about my teeth, Dr. Fang came in, shook my hand and looked over my old records and the dental assistant’s notes. He asked how I’d met the friend who had referred me, said how nice he thought she was. I agreed.

After this initial consultation, we headed to a shiny exam room. Dr. Fang did an oral cancer screening, the first time I’d had a formal one. He then took a sharp instrument and prodded and examined every inch of my mouth for about 40 minutes, giving notes to his dental assistant.

We discussed flossing, brushing and oral health issues. With an intra-oral camera that looked like a wand, he went through my mouth, showing me on the big screen every inch of my gums and teeth, blown up to a scary degree.

He pointed out that my gums needed another bout of what used to be called root planing but is now done with lasers. And that I needed to handle the issue Dr. Sam found but I also needed a crown on another tooth in the same area. He could do both at once, but first I needed to have that quadrant of my gums lasered.

As I looked at all my oral health flaws on the screen, I swore that I would floss more diligently, brush even more often and take better care of my mouth.

After telling me how glad he was to meet me, he said the assistant would Xray my mouth (which was usually the first thing my dentists did, not the last) and Dr. Fang would review all the data and only then develop a longer-term treatment plan, as there was more to do. Stuff that my other dentist hadn’t mentioned. Maybe more crowns. Old fillings that needed replacement.

Wow. I’d always wondered a little about the dental care I was getting. I see now it was clearly old-school. Here at Dr. Fang’s place, everything was high tech. I never once saw one of those little round mirrors dentists used to use to get a better view.

It appeared that I would be a frequent visitor to the office this next year. Just the next two months would cost me a hefty chunk of change. But I have every confidence that I’ll be getting exceptional dental care.

Whenever M and I talk about moving to a smaller community, we always come back to the stage of life we’re in and the importance of access to state-of-the art medical care. We have that with our concierge doctor and now we have it with a dentist.

There’s a lot wrong with the Bay area, and as much as I love it here, I see those flaws clearly. But medical and dental care are not among them.

By the way, I’ve been told that the best medical and dental care in the nation are in California, Washington state and…wait for it…Hawaii.