The surburbs – fourth in the series

We soon outgrew the apartment on Lancraft Street and moved to Irondequoit, a suburb just a couple miles from it. It was full of first generation American families making that better life their parents had hoped for. Italians were the predominant ethnicity in our town, so even though it was a step up, it was familiar and comfortable for our parents.

Our long, brick house sat atop a hill in a tract of homes that looked nothing like it. I suppose for my father, building this house and its location on a hill were proof that he’d succeeded. By today’s standards it’s not much, but to my parents, who were raised in Depression-era poverty, it –with its finished basement, step-down living room and four bedrooms –was the Taj Mahal. 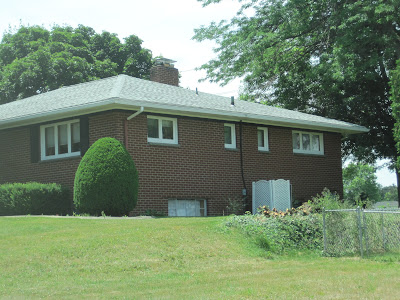 On the other side of those corner windows on the left was the bedroom I shared with my sister. The windows on the side faced north, which is why they’re so small. The lower windows belong to the finished basement. It had a ping-pong table but really, it was a great place for teenagers to make out because you could hear parents clomping down the stairs and had plenty of time to look innocent. I made the most of it.

I’m not going to say mine was a Waltons-style upbringing, because it wasn’t at all idyllic. It was closer to a Betty and Don Draper scenario, to be honest. Success always has its price, smart women stuck at home in the 1950s and 1960s had few positive ways to channel their intellects and kids often were the unwitting victims. None of it was intentional.

I came to learn that all parents do the best they can with what they have and so did mine. For me, Papa’s role as loving grandfather and Mama’s constant presence at home as grandmother-in-charge were loving and stabilizing forces. They are as alive for me today in my mind as they ever were. I keep the positives my parents had top of mind– and there were many.

You’d think that kids would band more closely together over that common ground, wouldn’t you? But that’s not what happened. It was every man for himself and I’m sorry to say that it still is. In my 30s I spent a lot of years sorting all this out with a very good therapist. With time and understanding I let go of all of the negatives and came to peace with every bit of it, which freed me to feel only love. I might be the only one in my family who did. 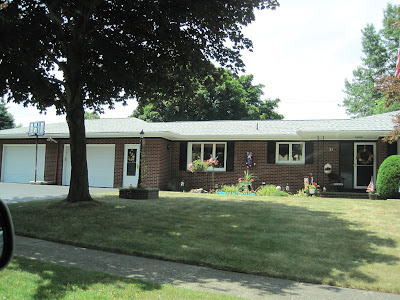 This is what most of the rest of the house looks like today, although our shutters and trim were white, not black. Some of the mature trees originally in front fell victim to a vicious ice storm in the 1990s, including a Japanese cut leaf maple that was my father’s pride and joy. I was thrilled to see two of them in our backyard when we bought our current house in San Jose. I like to think my father had something to do with it. 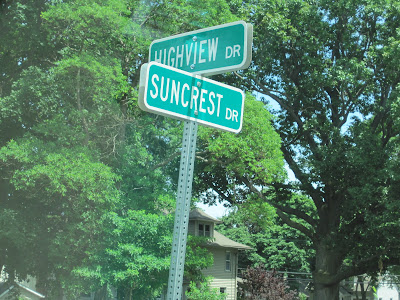 Irondequoit is so green it could be an advertising campaign for St. Patrick’s Day. But in 1957, these suburban tracts were just going up and the trees were mostly saplings. A long row of tall poplars lined our back lot line. They were beautiful, and made the most lovely rustling sound in the breeze. But they shed leaves like crazy. When my brother (who raked the leaves) left for college, my father cut them all down; he didn’t want to do the maintenance. I was heartbroken when I saw the barren yard. But he planted evergreens and over time, they grew to maturity. That’s the thing about time—it always heals. If you let it.

Our elementary school, Laurelton, was less than a mile away and we walked, rain, shine or snow. Well, ok, Mom drove us if it was really bad out. After all, we did live in the Snow Belt. But mostly, we walked–from ages seven to 11. My father really did have stories about walking miles to school in the snow and he expected us to be that tough.

About “tough.” The knack with tough is to tenderize it with vulnerability. Otherwise it can seem just mean. I think that’s been a struggle for all three of us kids, one that we’ve each fought with greater or lesser success.

On our route to school there was a large green and shaded gully. Laurelton is now an office building. But I can’t imagine parents today letting kids walk past that gully, a perfect place for a do-badder to hide. I can’t remember my parents ever having a talk with us about what to do if a stranger approached us. It just wasn’t that kind of world back then.

It would be nice to say that we aren’t affected by the heavily publicized bad things that have happened to kids. But today, you can’t be too vigilant about your children. Ask any law enforcement officer; they are among the most protective parents. But then, they see it all, much more than we see. As a result, kids have lost a lot of freedom and much of their innocence. It’s sad. But pretending that reality doesn’t exist is too risky. It is not the same world we lived in. Not by a long shot. 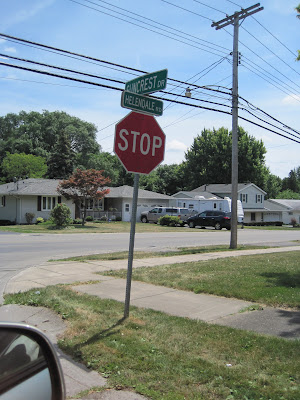 For me, high school was really just a place to wait for college. I chafed under the restrictions my Sicilian-American father placed on me and was biding my time until I could get away and achieve some independence. 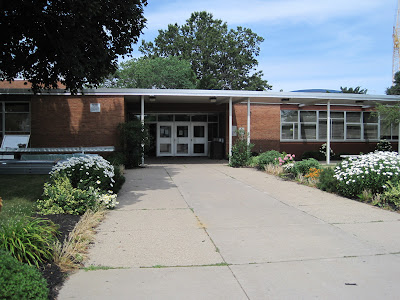 This is Eastridge High School today, still long and flat; I walked through these front doors every day for four years. It was the late 1960s and change was afoot. But it reached Rochester slowly. We only had two black students in our entire 2,000 student high school. A black student teacher arrived in our senior year — that was HUGE. I’m sure he doesn’t know how important he was to my formative years. I asked him so many questions, holding nothing back, and was like a sponge absorbing what he had to say. He opened my eyes to so many things, including the concept of social justice. The Black Panthers visited an inner city high school that year and he took a few of us to their presentation. I have no idea why my parents let me go, but I did go and for the first time was one of only three or four white people in a gathering.

Just a few years before, Rochester was one of the cities hit with major race riots. My father had to carry a gun when he went into the inner city ghetto to make house calls on his patients. That part of the city was not always safe for white people. When I think about how restrictive my father was, I also think about how he let me do this one thing, something that seemed out of character. But maybe it was my mother who signed the permission slip.

My father wasn’t a bigot; meritocracy was his thing. He believed in bootstrapping and that immigrants who came over without an education or the language had a much harder row to hoe than African Americans. His resentment was about the idea that other minorities without those handicaps might want “special privileges,” when he and others like him came up the hard way. On merit. 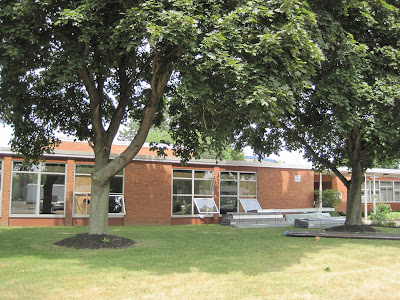 Eastridge was under some kind of construction when I visited. This is where Miss Webster taught me English and journalism (I’m pretty sure that room was the center set of windows), where I had my first love and where, in my senior year, I started my personal rebellion.

In 1968-69, girls still couldn’t wear pants to school. I led the uprising; I don’t think my parents ever found out (or I’d still be in a home for delinquent girls.)

About a dozen of us dared to skip school on one of the first Senior Skip Days. I can still see our assistant principal chasing us through Durand Eastman Park, yelling, “I’ve got you now!” For that little caper, I (and a few others) was kicked out of the National Honor Society.

It couldn’t have been more obvious: I was more than ready to move on.