The train! the train!

I left Florida on the cusp of a highly-publicized (and politicized) move toward a significant rail program; one that’s at least a decade away.The U.S. is decidedly behind other countries in embracing public transportation and our lag is noteworthy to anyone who’s traveled abroad at all.
The UK, Italy, France, Spain, Japan–so many other “less developed” (ha!) countries have functioning rail transportation that’s used by virtually everyone. Even China is building a super-fast rail system.We aren’t. Not on any major scale. It’s embarrassing.

We feel so righteous when we put out our small recycle box each week, filled with the wrappings from our convenience food, even as we pump 20 or 25 gallons a week into our cars and trucks. Silly, isn’t it?

Here, for all our talk about “green,” we’re overly attached to our big, fat, gas-guzzling vehicles. And to getting where we want whenever we want. On our own time, not a rail schedule.

Many people have never even been on a train. Except maybe the monorail at Disney. In fact, I’ll bet more Americans have been on the monorail than on a commercial train trip.

Then there’s the NIMBY crowd, that doesn’t want a train running through THEIR neighborhood. Forget that most of the accidents that happen are caused by people who try to run the warning gates or by suicides. Derailing happens once in a while, but so do airplane accidents. You don’t hear people worried about planes falling on their homes.

Oh, we are self-centered people, we Americans. It’s hard for us to see the greater good.

So it’s not so easy to generate a groundswell of support for rail.

And, railroad company lobbyists are some of the slickest in the nation. Let’s just say that in any deal, you can count on rail interests being protected to the extreme.

Some say that companies like Goodyear and major oil conglomerates have been behind our reliance on inefficient, expensive roads and highways. Companies with a vested interest in our dependence on motoring. I believe it. 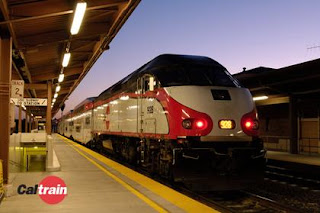 I’ve long loved rail travel. Lately, we’ve been using CalTrain to get to and from San Francisco and it’s saved time, money and aggravation. We love it.Sure, it may add another 45 minutes to our travel time. But the train is only $12 round trip plus a $7 cab ride to or from the station. That’s less than $30 in costs for one and $42 for two.

Parking at the Mark Hopkins for my writers workshop would have been $57 times four days. And about $35 a day when we zipped up to visit friends. Plus approximately $15 in gas.

It can be a compelling financial argument.

I agree with our vice president, Joe Biden, on rail:

With delays at our airports and congestion on our roads becoming increasingly ubiquitous, volatile fuel prices, increased environmental awareness, and a need for transportation links between growing communities, rail travel is more important to America than ever before.

We’re way behind the curve here. Past time to catch up.