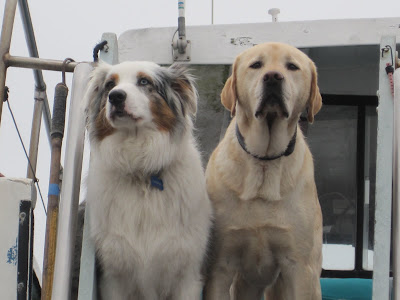 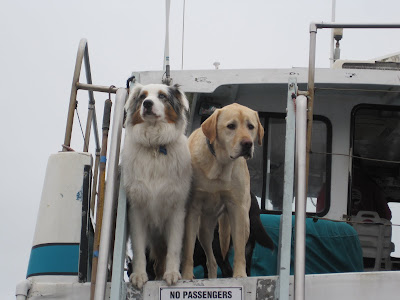 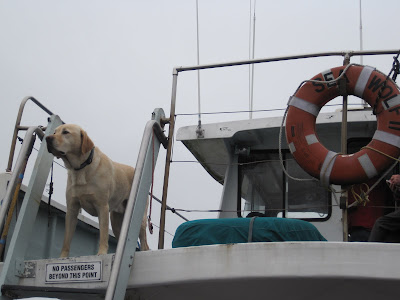 Note the sign: “No passengers beyond this point.” And she meant it, too! 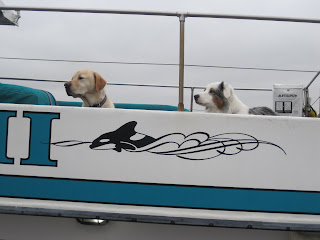 We drove to Monterey this morning for our whale watch trip. As usual, the minute I saw Monterey Bay off to the right as we drove in on Highway 1, my face softened and my lips curved up in that joyful smile that only comes when I see that particular sight.

My place in Pacific Grove is rented for another year and M. agrees that we’ll keep it for the foreseeable future. If the board won’t let me rent past this year, we’ll turn it into our coastal retreat again. YESSS! So I was really, really happy.

We boarded Sea Wolf II around 8:45 a.m. for our ride out to the Pacific Ocean just outside the Monterey Bay. Whales have appeared by the dozen this month, both humpbacks and also the rarely-seen blue whale, to feed on krill, which apparently are being found in boom quantities just where the underwater canyon drops off from 350 feet to 1,000 feet.

“Anything more than 5’9″ is over MY head, so what’s the difference,” M pointed, out as our captain explained. 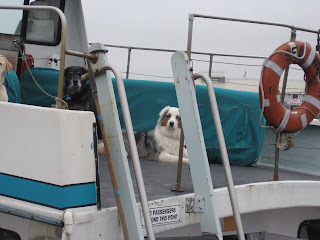 The good news was that our captain was a marine biologist.

That was also the bad news. 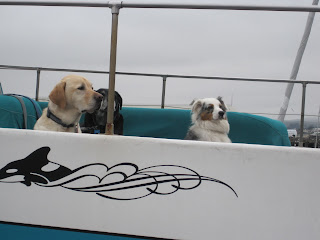 Our captain’s three dogs crew the boat and they are a gorgeous crew, I must say . Although one of the deckhands (also a marine biologist) was a fox. Not literally, of course. But cute cute cute. And young young young. 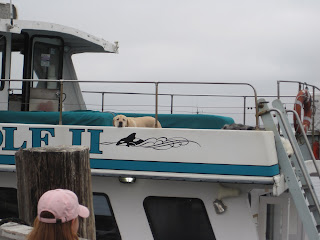 Gorgeous dogs, aren’t they? You can barely see the oldest dog, a black one, in one photo.

And we were all bundled up for the four- to five-hour trip out to sea. This is my nephew, Michael, in the red. I was so concerned that he and M. understand how cold it gets on the ocean and how warmly they’d have to dress, that I left my own warm hoodie at home. But we kluged together enough warm clothes for all. 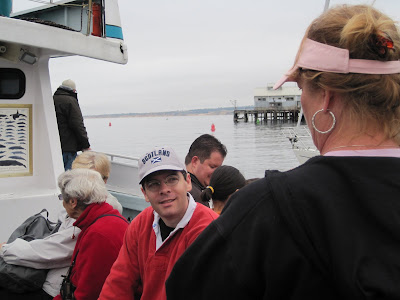 With young Michael is a woman from the East Bay, who was explaining all of the gang affiliations in the area. Last night he’d asked me to name the key East Bay gangs. Umm, like I knew.

Then, I met this woman on the boat, and it came up in conversation (don’t ask). I introduced her to young Michael and she gave him the gang rundown. She plays a role later in the trip, too, so hang in there with me on this. 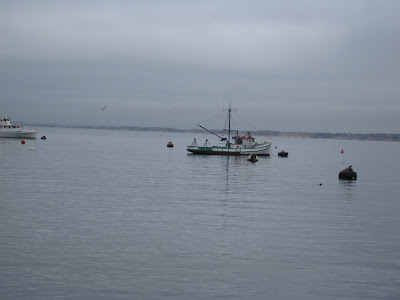 As we waited for everyone to board, we watched sea lions laze and otters float on their backs munching shellfish. Fishing boats sat calmly on the bay, at anchor. 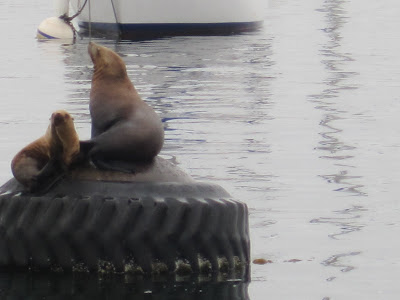 Then we motored past the breakwater and saw the entire gang of sea lions: every shape and color. 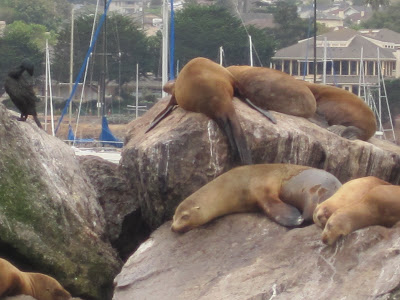 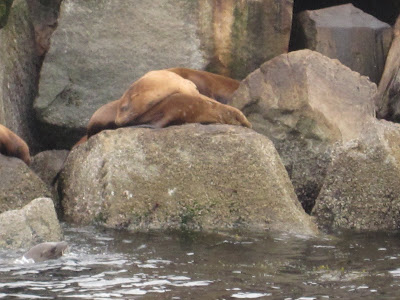 As our captain motored us past the breakwater, she gave us the rundown on what we’d see: primarily humpbacks and blue whales. Blue whales are the largest living creatures ever on earth, she said. Some 90 tons and as long as 60 feet. They are rarely seen, so we were in for a treat. The Monterey Bay marine biologists say they haven’t seen blues in this quantity, or this quantity of whales at all, in 38 years.

Once we were out of the harbor, she floored it out into the ocean. While it wasn’t exactly rough, it wasn’t calm, either. Suprisingly, I just don’t get sea sick. I love the ocean and while I can’t swim, nothing makes me happier than being on a boat.

Well, ok, some things DO make me happier, but a boat on the ocean is a good place for me and I did not need either ginger candy or Dramamine. Still the boat pounded hard through the waves and it was pretty rocky. If we needed to lose our breakfast, our deckhands told us to spew over the railing into the water.

Whales came up pretty quick as we droned and bumped on to the ocean. What a thrill to watch humpbacks breach, to see their flukes. And we did see some blue whale. More on that later.

I looked over at young Michael. His skin was beginning to turn strange colors. First he went pale, then turned yellow and finally, green. He did not look well.