I talked incessantly about being a writer and read books about writing and imagined in great detail my life as a writer. I did everything except write… Finally I sat down and thought very seriously about what it took to be a writer. I came to the conclusion that one thing, absolutely, was required: writing.
-Kate DeCamillo

Ok, so I’ve been a writer as part of my career
and been paid for it outside my career. Since I was 17 years old.
So only part of this is true for me.
I never talked that much about writing
and never imagined my life as a writer:
no need to; I was living it.

But like every other writer, I have done everything
except write. It’s a funny thing. We’re driven to write
while at the same time we seem driven to avoid it.
And such has been the case with my memoir. 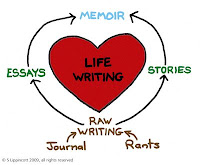 So here’s what’s new:
My writing coach and I sketched out a narrative arc that she thought would work.
But then I started doing writing exercises she assigned and a brand
new framework came to me.
One that was darker.
But not entirely dark.

Most people who hear my story think it’s wonderful.
And of course, it is.
What bothered me about it is that it’s very romance-novelish
in its simplest form.
It would make a great fairy tale.

But only if I left out a whole bunch of stuff.
Like the greater meaning.

I think this new idea has that greater meaning.

So my coach wasn’t as enthralled with it as I am.
She pointed out that it wouldn’t be as much fun to write, to read or to remember.
I’ll have to go to some deep places. Dark places.

“Maybe it’s just not a fun little memoir,” I pointed out.

She responded that I should write what felt right to me.

So that’s what I’m doing now.

Actually, what I’m doing is avoiding writing what feels right to me.

So like Kate DiCamillio, I’ve to the conclusion that one thing, absolutely, is required of me: writing. And if I have to throw half of it away down the line, I will.
Because that’s the way it works anyway. As I well know.
Because I have been a writer my entire life.