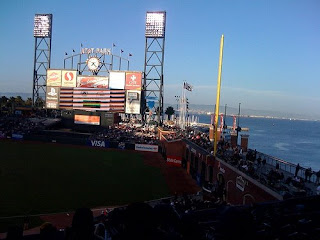 San Francisco Giants v. Oakland As. At ATT Park. We’re here! I slept through the alarm at 3am, thank GOD FLH heard it. But we finally got here. At Le Meridien.

A nice partly cloudy day. Moderate weather, compared with the heat wave we had to contend with last month.

FLH’s office had a pool on where I was taking him for his surprise birthday trip. One guy actually hit it by saying ALCATRAZ! I think he was probably joking, but he made some money on the joke. Good for him!

Tomorrow:
Taking the train to the South Bay, where we are looking at a dozen more homes.
Train back quickly for the Alcatraz NIGHT TOUR! Supposed to be eerie and fabulous at night.

Then, finally, two mostly free days. His choice. Probably SFMOMA and the stadium tour we missed when our flight got cancelled.