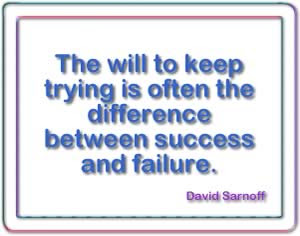 One of my friends had been looking for a job for months and months. A year, maybe.

Still, she kept at it, networking, sending resumes out, keeping up with social media contacts, scouring online sources and ads.

She refused to get discouraged. She just kept working at it. Every day.

She’s just found a job she likes. She didn’t get to the 99 weeks of unemployment compensation she could have gotten. Or even two sets of 26 weeks of pay. But she did get quite a bit of unemployment. Difference is that she aggressively sought work.

And she’s not the only job hunter I know who’s managed to find a job by just trying. Yes, actively looking can be effective!

I’ve read all the op eds demanding that unemployment be extended. Paul Krugman’s assertion that those who want to deny the extension are “a coalition of the heartless, clueless and uninformed” seemed ignorant to me.

He’s wrong. We’re think help is a good thing, but that too much “help” without requiring responsibility has robbed entire generations of their motivation and self respect.

But we live in America and we’re spoiled.

Well, enjoy it while you can. Egg rolls will be our national dish soon enough.

And then it’ll be an entirely different deal.