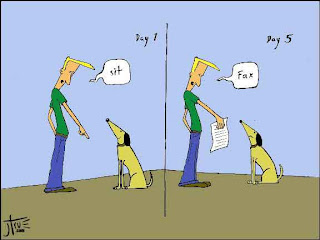 There are as many approaches to dog training as there are trainers.

We’ve been talking about what kind of training to try next with Riley, who has developed some very serious bad habits that we’re ill-equipped to deal with. And we need help integrating our animals in this blended family of ours.

Some of Riley’s behavior problems began when the other dogs joined us. Others developed around the age of two. (He turns three on March 10)

We’ve had a lot of training, Riley and me. And I freely admit that when I worked, it was impossible for me to keep up with as much homework as he needed. That consistency was lacking. That I gave commands I couldn’t enforce.

So I know that a big part of this is me.

But, as M. said the other day, Riley is unlike any dog he has ever had. Riley is aggressive, dominant, assertive and appears confident. He’s barky and can be defiant. He’s too smart for his own good. And he never, ever has cowered at an admonition.

Riley has had a lot of positive reinforcement training. With treats or affection or praise. I’ve come to believe that, at least for Riley, there are limitations to that kind of training.

The issues are so serious that we’ve decided to look into another style.

I am well aware that in the dog training world, Cesar Milan’s name is mud. That many trainers feel it is unnecessary to achieve dominance over a pet.

That is certainly ideal.

But those trainers don’t live our life with our dog.

This morning, a well-qualified trainer closer to the Milan style is making a house call to evaluate our situation.