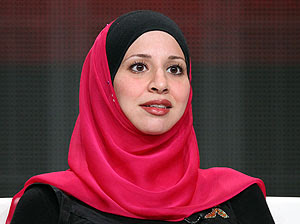 “Christianity is just hatred in disguise.“
-a Christian young person I know

Some random religious fringe group in Tampa (of all places) called The Florida Family Association (don’t you love the name?) is pressuring advertisers to withdraw air time bought on the reality show, All-American Muslim. Apparently, its commitment to traditional, biblical values makes it uniquely qualified to determine that the show possesses a “hidden Islamic agenda.”

Of course, FFA conveniently forgets all the real Christian values. You know, “love thy neighbor,” “forgiveness,” etc. And apparently they believe that all Muslims adhere to this so-called hidden agenda. Just like Jews killing Christ. Who was also a Jew. Twisted reasoning.

Before I watched the TV show, I knew very little about Muslims in America. The window the show provides taught me about their world –and about Islam in general. It’s probably done more to dispel myth than anything in recent years.

Shockingly, home improvement chain Lowe’s capitulated to the FFA “pressure.” Not very American of Lowe’s, now, is it? Apparently its management has forgotten that America was founded by people seeking religious freedom. Check the history books, fellas.

But then again, so many religious fundamentalists think religious freedom is their right and theirs alone. Others should not have the right to worship differently, they think. They should be converted or “saved.”

Lowe’s says that boycotts by those who believe it shouldn’t have pulled the ads will just be a temporary blip on its sales. Sadly, they’re probably right. Still, it won’t get my business again, that’s for sure. Management also made a lame press statement about how much emotion this show generates “on both sides.” It fell flat, as it should have. You can’t play it both ways, Lowe’s.

The good news is that ad time on the show is now sold out, and that wealthy hip-hop mogul Russell Simmons stepped up and said he’ll buy up any remaining time. Kudos, Mr. Simmons, for putting your money where your mouth is. Fortunately, the show’s ad time SOLD OUT. YES. And kudos to Campbell Soup, Sears and Bank of America for not knuckling under to these crazies.

It’s telling that the young person I quoted above sees the hatred being perpetuated by some of these so-called religious groups.

Unlike my young friend, I don’t believe that all Christianity is based on hatred, but some Christians behave as if it is, and that sickens me.

The Hall of Shame today for:

Click HERE for more details. As for me, well, I’ll find alternatives to shopping at bigoted Lowe’s. I’ve done this before with a retail outlet whose sales pitch to me was political rather than consumerist, and I’ll do it with Lowe’s. Maybe just a blip, but at least I feel I’m doing something.