Updated West Side Story reflects our loss of innocence 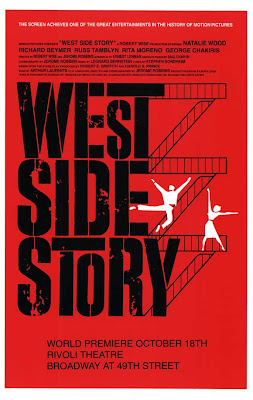 West Side Story (1961) was one of the first ‘adult’ movies I ever saw. Inspired by Romeo and Juliet but set in mid 1950s New York City, it’s a dark, sad story of young lovers doomed by gang rivalries.

First performed on Broadway in 1957, it was famed lyricist Stephen Sondheim’s Broadway debut and one of the gems in Leonard Bernstein’s well-deserved crown. Who hasn’t felt the joy of being with their beloved, so beautifully portrayed by the song, Tonight? ♥ Or prepared for a date with the giddy excitement of Maria as she sings I Feel Pretty. Or even felt the heartbreak of a love they can’t have, as in Somewhere. Universals in the hands of Sondheim and Bernstein? Exquisite.

With all that talent plus modern (for that time) choreography by Jerome Robbins, it really was a powerhouse production. The movie didn’t disappoint, either, with a young Natalie Wood, hot and sexy Rita Moreno and George Chakiris. And great dancing, especially by Russ Tamblyn. They weren’t the greatest voices of the time, but their performances were sweet and just right for the era.

So when the Broadway touring company came to San Jose, I looked forward to seeing the production.

West Side Story has always held a kind of innocence for me, even though the story pivots on gang rivalry. NYC gangs at that time weren’t tame, but they weren’t as sinister as gangs today.

Gangs in the 50s weren’t innocent by any means, but they “rumbled ” more than they killed. Their rites of passage didn’t involve taking lives, then getting teardrop tattoos to commemorate the murder. They had knives and handguns, not assault rifles. It seems strange to call gang wars back then more wholesome but compared to today, they certainly seem tamer. Things are different today, and as expected, that contrast was sharply brought home in the story. I couldn’t help but grieve for that lost time when life wasn’t so extreme.

I believe a play should be performed as originally intended, unless it’s completely restaged Shakespeare in modern dress or something like that. You can’t update a play effectively if you’re just changing snippets. It’s hard to keep the mood and flow of the original. You’re either all in or not, or so it seems to me. It takes a deft hand to only partially update a play.

That deft hand was missing the other night. While we can’t expect that a more than 50-year-old play wouldn’t be updated at all, I thought some of the updates in the touring production of West Side Story detracted from the story’s cohesion.

From Row 21 (we got our tickets late), it was hard to differentiate between the Sharks and the Jets. Better costuming would have helped tremendously.

I didn’t much like that some dialogue and songs were updated and performed Spanish to “reflect how the characters would have spoken in their own homes.” Too much. It felt like a nod to political correctness that distracted from the story. Getting the “intent” of the song or the dialogue wasn’t enough. It isn’t opera, after all.

The production was much edgier, even racier, than the original, especially the dance sequences. Some of it was riveting. But some of the “updates” to the ensemble choreography seemed cheap and gratuitous. For example, I was jarred when dancers came to a momentary stop while the dancer at center stage–the audience’s focal point– turned his back to the audience to spread his jeans-clad buttocks at the audience. What the hell was that? I thought. Worse, the audience laughed with appreciation. Maybe of his firm butt? I don’t know.

It was jarring to see that even our most revered plays have been rewritten to pander to the lowest common denominator. I expected a huge penis coming at me from the screen in Harold and Kumar’s sophomoric 3D Christmas movie. Or at least I wasn’t surprised. But spreading one’s butt cheeks to the West Side Story audience? It was unnecessary. I mean, I love a firm butt as much as the next girl, but it’s all about context.

Still, it was wonderful to reacquaint myself with the characters, the music and the movement. Take a moment and lose yourself in some of the most romantic songs ever written.

Here’s a beautiful duet of Somewhere from Glee

Here’s Russ Tamblyn as Tony and Natalie Wood as Maria, singing Tonight. From the film.