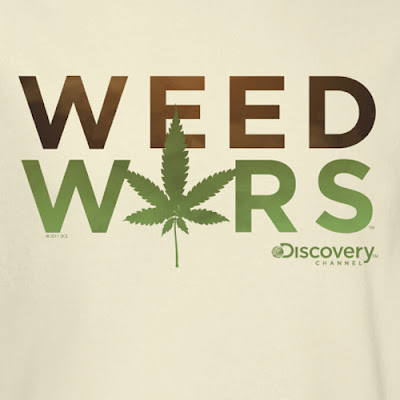 We caught the new reality television show, Weed Wars, the other night, and were astonished to see that –unwittingly–it is well on its way to becoming a cautionary tale, a 21st century version of Reefer Madness. An unintended consequence, I’m sure.

First, full disclosure: I think cannabis is pretty benign. Like with any substance, moderation is the key. I also believe weed’s got medical benefits that our very strange view of “morality” prevents us from fully exploring. And finally, yes, I believe weed should be legalized and taxed. Nationwide. In California, medical marijuana is legal. But federally, it is not, and since federal law supersedes state law, we may not have our medical marijuana dispensaries for very long. Nothing like wasting taxpayer money to fight something helpful to sick people at best and relatively benign at worst.

But let’s talk Weed Wars: when the show’s producers found the middle-aged characters who run Oakland’s Harborside Medical Center, a $21 million cannabis dispensing operation, they had to have known they’d hit gold. These guys are straight out of central casting. I can just see people in the flyover states nodding every stereotype of California and of people who like smoke is confirmed. 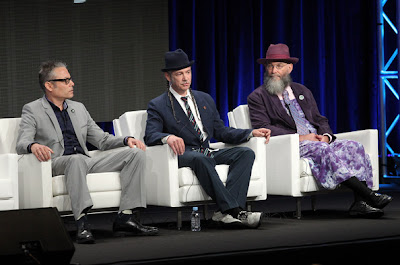 The brothers, on the left and center. Dress is on the right, as you can see.

Steve, a co-owner, sports a porkpie hat, a pair of long, skinny braids, one of those huge round earrings that makes a big ear hole, and says he likes to bite off a little edible weed before taking the podium for a public speaking gig. It makes him relax, and maybe even “a little funny.” I’ve seen him come off as reasonable and bright on a documentary. But on the show he looks and sounds like a complete airhead.

Dave Wedding Dress is also a co-owner. He’s tall, got a full beard and yes, wears dresses and skirts. And changed his name to “Dress.” Which is what he’s called. He was a very quiet presence in the first episode, wearing a jacket, tie and long skirt. On the far right above. In case you didn’t notice. I love a man in kilts, but when I saw this dude, I could only ask, “WTF?” The farmers Grant Wood portrayed in his American Gothic oil painting are rolling their eyes.

Andrew, Steve’s brother, is the wild-eyed general manager with a maniacal laugh and a decidedly giddy personality. This dude is seriously nuts. He’s the guy on the left, above. He’d be well-served by cutting back on the smoke. Truly.

There’s a staff salesman whose mother –a therapist, of course–thinks he’s smoking so much weed he’s lost his ambition. And at least from how he’s portrayed in the first show, she may have a point.

And then there are the patients. A woman who asks for the “senior discount.” People with cancer and chronic pain, who really need the relief cannabis provides. And there are those who clearly just want to get high. (I see nothing wrong with this–we have a long, cultural tradition of getting high–just look at all the bars in the U.S.)

The CFO, Luigi, has no strategic skills whatsoever. He’s sent to appeal to the Oakland City Council’s tax committee, which has levied a $1 million retrospective tax on the business. His pitch — “It will shut us down” — was as inarticulate as any I’ve seen. Perhaps it’s the constant bong hits he took on camera. To Luigi, I say: “Sugar. Bong hits do not make you more articulate. They make you less.”

The committee unanimously finds for the city. The tax must be paid.. Luigi gives Steve with braids the bad news. Steve is unmoved.

“No,” he says, definitively, tossing his braids. “Call the Council and tell them they simply have to change that law.” Luigi nods in agreement.

Right, boys. That’s how it’s done. You simply call the City Council and tell them to change the law. Are these guys kidding?

These men are completely delusional. It’s easy to suspect weed as the cause. But it could be that they’re all just crazy. 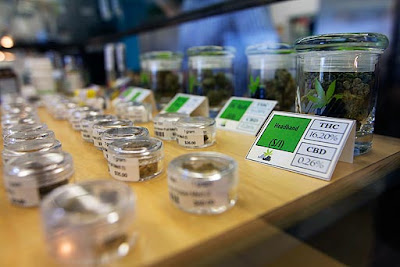 Photo credit: thanks to https://bestcbdoilfor.com

Having said that, the operation is pretty sophisticated. The guys and their chief purchasing agent clearly know a boatload about cannabis. It was interesting to see them evaluate potency and look for flaws like mold. It’s a viable business. And I could practically smell the characteristic fragrance through the TV when they opened their big bags of bud and dug in to have a closer look. I was once in the home of a grower who had boxes of open bud. The house smelled wonderful.

As entertainment, Weed Wars is good stuff. But in the name of entertainment, it’s significantly setting back the cause of marijuana law reform. Boys, your plan to educate the public is backfiring. Expect the feds to raid you any day now.

NORML* should be concerned.

*National Organization for the Reform of Marijuana Laws, founded around 1970. www.norml.org

2 comments on “Weed Wars on Discovery: an unwitting cautionary tale”