It’s got Spielberg involved, but it’s not doing very well. We might be the only people watching this hot mess, which runs on Fox at 8pm on Mondays. You can also catch it on Comcast’s OnDemand.

The show is badly written, but the premise is irresistible, and we’ve become fans. But not because it’s so good. Because it’s fun to predict the next lines of dialogue and plot points as we go, and then high-five each other when we’re right.

Which is most of the time.Because it’s so badly written.

But if you’re not watching, you really ought to get in on the fun, as it’ll probably be cancelled. And smoke a joint before you tune in. 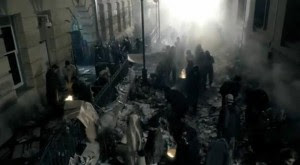 Yes, this is what we’ve done to Earth. It’s the year 2149 and we’ve really effed it up good. The air, the water, the whole thing. Dark and terrible. Resources are so strained that families are restricted to two children.

BUT, fortunately, we’ve found a way to access an alternative timeline that allows us to go back 85 million years to dinosaur era…late Cretaceous prehistoric earth, to be exact…and we can get to it and form a colony. But it’s only a one-way street. Welcome to….

Yes. Welcome to Terra Nova. Get ready for amazing prehistoric animals. There’s an evil beast called a slasher and all sorts of un-Barney-like dinosaurs and nasty creatures. 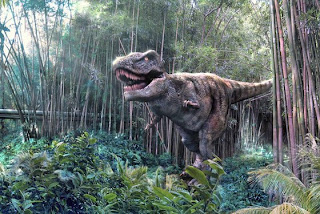 Don’t go OTF (outside the fence) without your weapons! 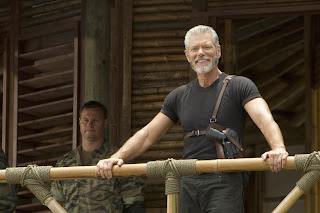 Commander Nathaniel Taylor runs the show. He may be old, but he’s hot-hot-hot. An old dude in such incredible shape that, well, he’s eye candy. Old eye candy. However, he’s dumb as a stone. But being so hot, we don’t much care.

Also hot is the villain of the story. Villainess, actually. Meet Mira, leader of a rebel group called The Sixers. (below) Because they came in the sixth transport. They’re bad, but not all bad. However, it’s totally refreshing to watch Mira kick the shit out of people. She’s in seriously good shape. A woman as villain, and black to boot? Love it. 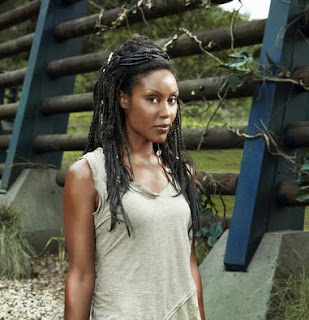 Scroll down for a shot of the Shannon Family. Jim Shannon’s a cop. Of course. And Elisabeth Shannon is a trauma surgeon, natch. Two daughters and a son (they had the second daughter illegally and Jim was imprisoned in the Old World for it.) 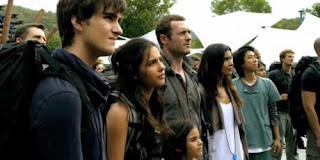 One completely implausible story line has surgeon-mom doing in-ovum surgery on an unborn slasher that has a birth defect, only for the youngest daughter to want to keep it.

Right. Can we keep a lethal animal that will end up weighing 200 tons? Clearly a future storyline will have them release the dino to the wild, only to have it SAVE the little girl from other dinos that want to snack on her.

The teenagers are completely unlikeable whiners. But each show ends with the family all sitting together giving each other sappy grins. We love it and we imitate it before they do it. Next time you see us, ask us to show you.

I think a better way to end each episode would be for the Commander to take his clothes off for the camera. I mean, he’s hot. How about another shot of those guns? And I don’t mean weapons. 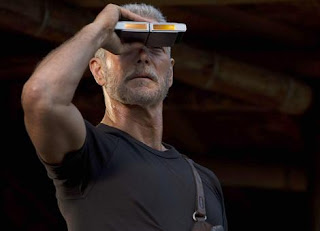 By the way, the Commander is played by Stephen Lang, an acclaimed stage actor. Which may be why it’s taken him a while to loosen up in this role.