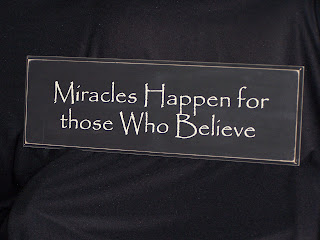 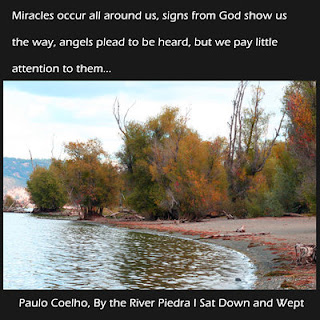 It’s easy to miss signs of the wonders ahead when we’ve been deeply wounded, or when we’re busy being beaten down by the day to day drone of life, or when we think something is too good to be true.

To really pay attention, we have to believe that wonders are in store. But we’re usually afraid to believe. Afraid we won’t get what we want.

And yet, what’s the harm in believing?

The Word-Faith movement of Christianity holds that faith is a mighty power that can be used to bring us anything we want. Say it, do it, receive it and tell it. Sound familiar? It’s quite similar to the Law of Attraction described in The Secret. And yes, you’re right, ain’t nothing new under the heavens. It’s all been said/done before. And is probably in the Bible somewhere.

Now, there’s some convoluted thinking in parts of that movement. But here’s the thing. We waste a lot of time and energy worrying that we won’t get what we want, when life would be clearly better if we just believed and affirmed it.

So let’s say you affirm it, stop obsessing and don’t get what you want. At minimum, you’ve just saved yourself a whole heap of angst.

Plus, it’s been my experience than when one thing doesn’t work out, it leaves room for something else wonderful to happen.

I come by my own worry honestly. My mother was an obsessive worrier and she passed some of that on to us. But I’ve decided to give it up. These new friends of mine, faith and trust, are a great influence on me. Thinking positive and happy thoughts gives me a glow and makes me happy every day.

I completely believe I’ll get my heart’s desire.

But even if, by some fluke of the universe, I don’t, I’ll get something better.

As Mad Magazine’s Alfred E Neuman has said, repeatedly: “What, me worry?”