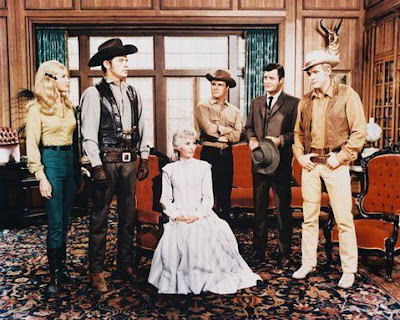 Westerns used to be all over TV. Not today: today’s kids haven’t seen that many. Some haven’t seen any at all.

So as part of our study of television, I’ve shown my Mass Media & Society class three different TV westerns from different eras: Gene Autry, The Rifleman and The Big Valley.

They are writing a paper comparing and contrasting the shows to illustrate the way TV drama developed over its 15 early years. Already one student (who I thought was sound asleep) noticed that Gene Autry’s themes were simplistic, while The Big Valley program I chose was darker and more complex, about violence against women.

Interesting, Sammy Davis, Jr. played the black hat on the Rifleman episode. No one knew who he was until I told them. I’m interested to see if they noticed the black hat/white hat dichotomy.

Barbara Stanwyck was as amazing in The Big Valley as she was on the big screen. The only true actor in a bunch that included very young and thin Lee Majors and Linda Evans. The contrast was noticeable.

We have strong dramatic actors today; Meryl Streep, Glenn Close and Jessica Lange come to mind first. But Stanwyck had such power and elegance on the screen and her acting was so controlled and professional. Just a pleasure to watch.

I love this photo because it places her at center stage, the focal point of the group. As she should be.

I was a teenager when that program came out. Few of today’s teens would even know who Stanwyck, Majors and Evans were.

As with The Deer Hunter, which my class saw two weeks ago, I like introducing them to something out of their usual frame of reference. Shaking up the class a bit.

I still give them True or False quizzes on the reading. They are, after all, freshmen and we have to keep them honest about doing the reading. But they’re writing a lot of analyses, which take time to grade. (I’ve gotten some good ones, too.)

I’d be bored stiff if I had to teach just facts.

And so would they.

But it sure is a lot of work.