Who are we, really?

February 10, 2010
It is thus with most of us; we are what other people say we are. We know ourselves chiefly by hearsay. –Eric Hoffer

And that’s unfortunate, really, because it’s the source of much insecurity.

Hoffer was an American social writer who died in 1983.

The now overused concept of self-esteem was new when he wrote about it, and although Hoffer was a fascinating thinker with many facets, the quote (whichI ran across in another blog) made me think about how we form our view of ourselves.

I can, in fact, be a cynical bitch.

Well-placed cynicism is great armor in a world that sometimes seems illogical or confusing. And it’s a really great armor against self-proclaimed “fair and balanced” filters of our news.

Much as I’d like to see myself as tough and cynical, the fact is that I am a complete pushover. My cynicism is a shell.

But if you don’t look beyond the shell, you won’t know me.

I used to lead with my armor. I don’t do that so much now, because over the years, I saw how it made others formulate a skewed picture of me.

When you encounter that skewed view enough times, you start to believe it. It wasn’t productive. So I modified the way I approached the world. 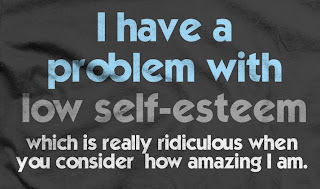 I’ve been talking for some months with a dear friend who, like me, has had unsupportive and negative people around them. People who really should care, but don’t. Insecure people who feel that others’ success and adventures take away from their own lives.

A while back, she told me, “They don’t know you and they never will.”

I think that’s true, in both our cases. It’s hard to not care when people in your life are hateful toward you. But the thing is, if you pay attention to it, then it can’t help but influence your view of yourself.

Which is why “culling” is so necessary.

By mid-life, we are who we are. If we’ve spent any time at all examining our life, and trust me, the examined life IS hell, we’ve come to terms with the good, the bad and the ugly about ourselves. With any luck, we put the good up front.

If others can’t see it, perhaps they don’t want to.

At midlife, we should be secure enough to see ourselves, not by hearsay, but as we are.