Women at their worst 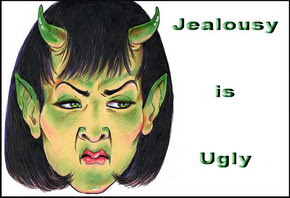 I watched the latest episode of the NJ Housewives last night, and I’m here to tell you that the Lord of the Flies has got nothing on these women. Unbelievable.

Women can be mean, cruel and gratuitously so. It’s not very attractive.

Last night, the “family” outed Danielle as a coke whore, stripper, involved in kidnapping, prostitution and a drug cartel. This, based on a book written by her ex. Who was definitely involved in all that.

Watching the “family” get together and conspire against Danielle really made my stomach turn. I know that each of the housewives shows has a target. I guess that in NY, the targets–first Alex, then Bethenny, then Kelly—seemed more capable of handling it.

Not sure I can watch this particular show again. Women at their worst.

In recent months I’ve encountered some of that women-at-their-worst behavior, myself. A little different than the NJ women, but still very clearly that kind of mean spirit and jealousy.

I have a friend who has yet to make any positive noises about the goodness that is my reconciliation with FLH. And I think I know why. She has been single her entire life. And (to put it mildly) I have not been.

She has been unable to connect with a man in any long-term, positive way. Ever. And as you know, that hasn’t been my problem.

I’ve seen this before. Someone else once told me she thought it was unfair that I’d had two husbands and she’d had none. How crazy is that?

Now, I don’t expect everyone to jump in the air and click their heels in joy for my happiness. But those people who know what I’ve been through and who really care about me say at least that they are happy for me.

And because of the unique parts of the story, most people do express amazement. She has been very flat. Even when asking about wedding plans.

Her silence has been deafening. I don’t know why I’m surprised. Women who think that another woman’s happiness takes away from their own are not that uncommon.

I feel very sorry for her.

In that same vein, someone in my life is incredibly passive-aggressive. And in a very mean way.

This woman is self-centered to the extreme. So much so that she is unable to see any point of view but her own. Over the years, she has been abusive and mean. I’ve tried to ignore it. But really, it’s cut deep. And my fair treatment hasn’t changed a thing.

Still, I’ve always operated in shades of grey. I try hard to see the other point of view. It’s mostly worked out for me, but when it doesn’t, it’s usually in a big way.

One thing FLH is teaching me to be a little more black and white. Caviar? he hates it and that’s that. Same with green beans. AND same with anyone who hurts another person. Or me.

Right now we are contemplating whether to invite someone to our wedding we know has harmed a child. It was in the past, but it was bad. He is thinking about it.

A person who hurts me goes immediately on his shi_list. He isn’t going to have much to do with someone who treats me badly.

I like the way he makes me feel protected, and I can see the value of that black and white thinking.

I could probably do a little more of it, myself.